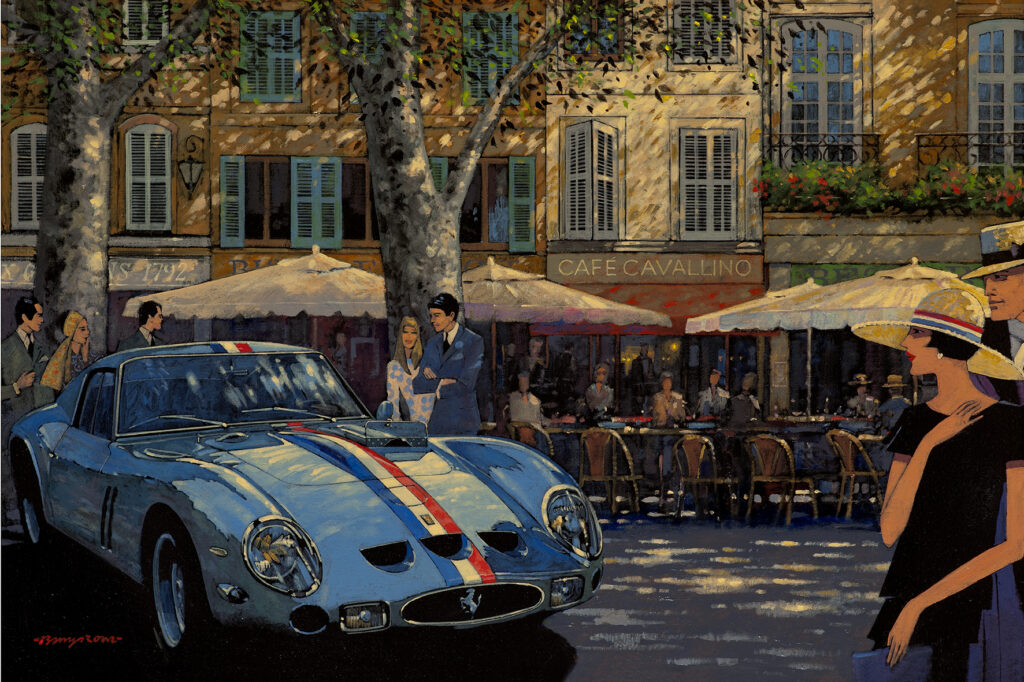 I knew Barry for many years and wrote this article about him in 2021 for Automobilia Resource Magazine. Barry passed away on 25th June (2022) having suffered with Parkinson’s disease for a number of years. He was one of the people who inspired me to run my marathon trilogy for Parkinson’s UK this year. He will be sadly missed. Rupert Whyte.

The South of France. The feeling of the sun on your face, the smell of provencale lavender in your nose. As you take a sip of chilled rosé you look admiringly across the quiet square from your table in Café Cavallino at a beautiful Ferrari parked in the soft, dappled light of the trees. 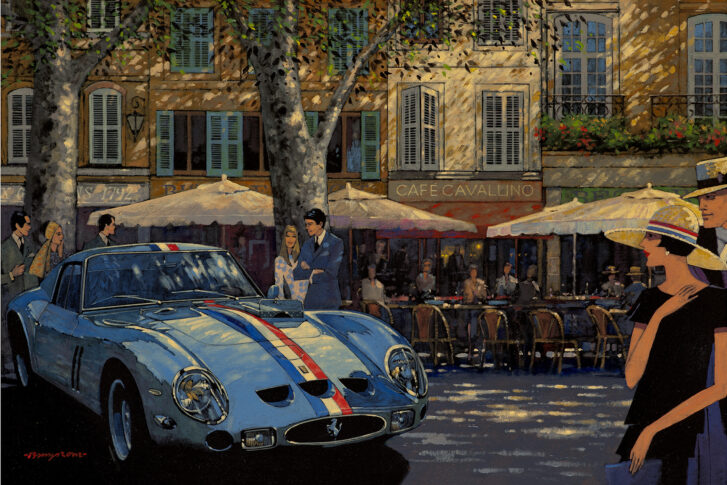 GTO in Provence by Barry Rowe

A few miles along the coast the sun still shines. This time the smell is of hot oil, benzene and rubber.  You hear the narrow tyres of a Bugatti 35B Grand Prix car screeching to a halt in the Monte Carlo pits. Mechanics get to work on the car, the driver takes a rest in the hoarding clad garage whilst a crowd of stylishly dress onlookers take in the dizzy atmosphere of the 1930 Monaco Grand Prix qualifying. 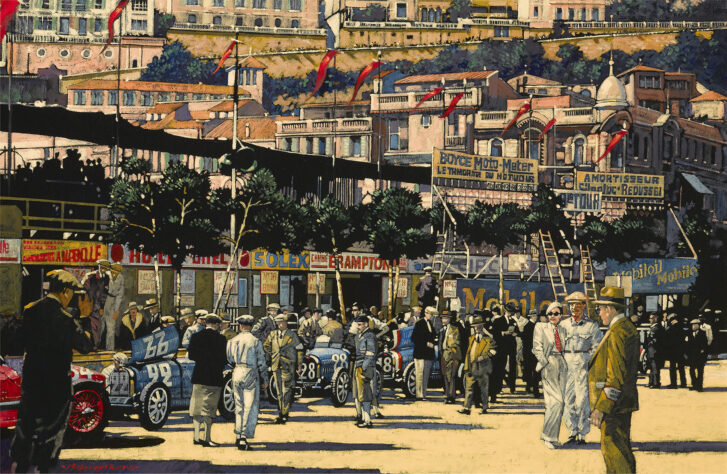 Paintings by Barry Rowe. Atmosphere and Light. Two words that can be used to summarise the content of so many of the paintings by this Automotive Fine Art Society (AFAS) artist. It’s no coincidence that those words were chosen as the the title for his award winning book published in 2006. A retrospective of his works. Look through a selection of Rowe’s vast artwork archive and you will soon find a love of the Mediterranean countryside, race circuits and glamorous automobiles – Bugatti, Alfa-Romeo and Ferrari in particular. Crowed pit scenes, beautiful architecture and finely dressed spectators also feature regularly. 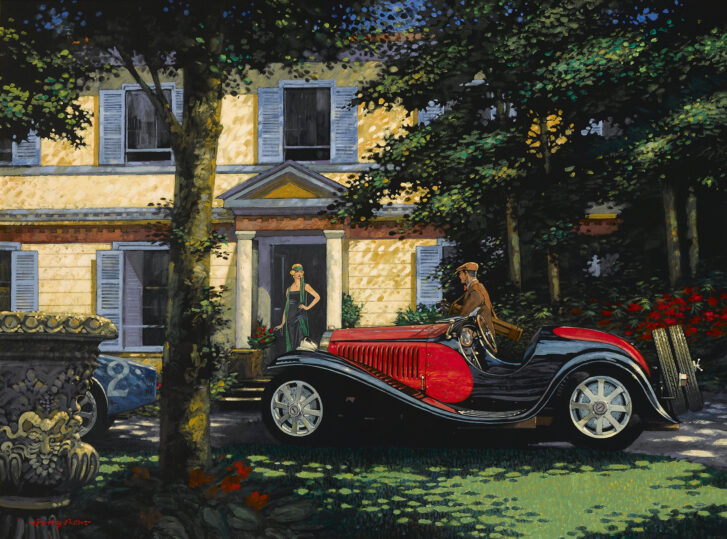 Coventry, England couldn’t be further removed from the Cote d’Azur. Rowe grew up near Jaguar’s Coventry factory in the 1950’s. His father worked for Jaguar and so, inevitably, Barry had an early fascination with cars – racing cars. As a youngster he would often spend his Saturday mornings looking at the damaged and broken retired racing cars left outside behind the factory.

He loved to sketch the cars he saw. He was always top of the class at school when it came to art. The subject he nearly always chose to depict was cars. He went on to receive a scholarship to attend the Coventry College of Art where he studied graphic design. By 1960 Rowe’s artistic talents lead him into the advertising world where, after a short while learning from senior artists, he was soon illustrating brochures for well known automotive companies of the era. Six years later, having become art director Rowe left agency work to set up as a freelance. As business boomed Rowe never lost his love of automobiles and motorsport.

“It was whilst lecturing at Falmouth art college that I was inspired to take up painting again” says Rowe and in 1994 he decided to enter an art competition run by the Transport Trust and sponsored by Sothebys. “To my surprise my portrait of Juan Manual Fangio won!” After receiving his prestigious award his automotive art career took off. He soon had commissions from Louis Vuitton, Royal Mail and Aston Martin.

Invited to join the Automotive Fine Art Society in 1996, the Pebble Beach Concours committee sought him out for the event poster in 1998. Rowe would go on to produce either the Concours or Tour poster (or both) for the next 20 years. No other artist has ever been so prolific for the famous event.

Rowe cites German artist Walter Gotschke as a firm favourite and influence although it’s difficult to draw comparisons between the two men’s styles. One working up the canvas from a dark background for a detailed illustrative style, the other much a lighter and more expressionist approach. One thing is for sure – both artists are loved by automotive companies.

In his later years Rowe’s high work output slowed down. He handed over the Pebble Beach gig to younger blood a few years ago, but his work still remains greatly admired and sought after on both sides of the Atlantic. 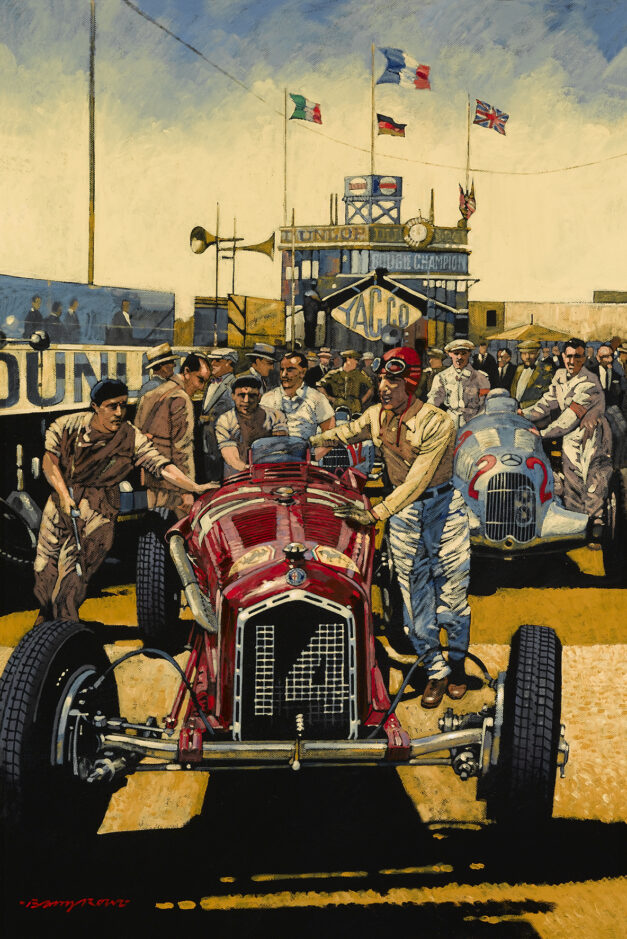